The dedication and financial support of the Vincent Club, which over the years has raised millions of dollars for obstetrics and gynecology services — initially provided at Vincent Memorial Hospital and today at Massachusetts General Hospital — has been pivotal in advancing women’s health. 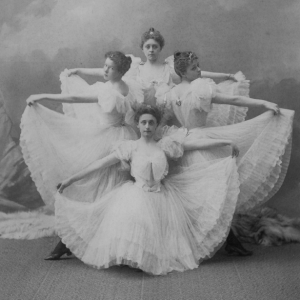 In addition to the friends of the 19th-century actress Mary Ann Vincent, for whom the hospital was named, early support of Vincent Memorial Hospital was provided by the Vincent Club, organized in 1892 by the senior class of Mrs. Shaw’s School for Girls. The club’s aim was to raise funds for the hospital through a theatrical production of its own making (photo: the Vincent Club’s “Tableaux Vivant,” 1894). With unceasing energy and spirit, the Vincent Club is alive and well today, Through its original musical reviews, symposia and other distinctive events, it continues to support new directions in women’s health, today shaped by physicians and researchers in the Vincent Department of Obstetrics and Gynecology at Mass General.

The founding of Vincent Memorial Hospital and the Vincent Club, both named in honor of the beloved actress Mary Ann Vincent, who was born September 18, 1818, was featured in a 2019 newspaper story highlighting Boston Mayor Martin J. Walsh’s proclamation that September 18, would be celebrated as Mary Ann Vincent Day. It was the culmination of the Vincent Club’s year-long observance of the actress’s 200th birthday.