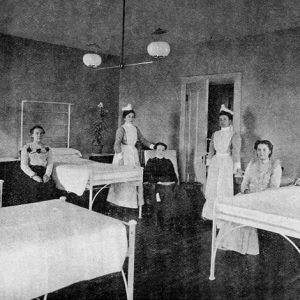 Vincent Memorial Hospital was founded in 1891 by the friends of Mrs. Mary Ann Vincent, a generous Boston actress who had a great heart for women in need. Dedicated to the care of wage-earning women, the freestanding hospital was originally located at 44 Chambers St. in the West End of Boston, near Massachusetts General Hospital (photo: Eaton Ward in the original hospital). The hospital’s early medical staff consisted of Grace Wolcott, MD, and Lena V. Ingraham, MD, and the hospital’s governance was led by a Board of Trustees. In addition, a Board of Managers, a group of volunteers serving Vincent patients and staff, was initiated, as well as the Vincent Club, a prominent group of donors. All groups are active today. In 2019, Boston Mayor Martin J. Walsh proclaimed September 18, the birthday of Mary Ann Vincent, to be Mary Ann Vincent Day in honor of the famed actress and humanitarian, who inspired a legacy of excellence in women’s healthcare. 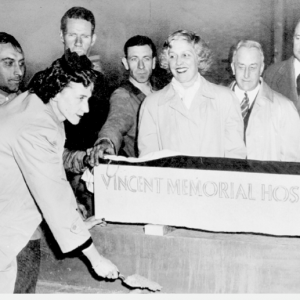 Growth and Merger with Mass General

The first hospital quickly outgrew its 12-bed capacity. In 1908, it moved to a new and larger facility on South Huntington Avenue, where it remained until 1941. At that time, the hospital’s Board of Trustees and Joe Vincent Meigs, MD, the noted gynecologic surgeon and Vincent chief of staff, recognized the tremendous potential of merging Vincent Memorial Hospital with the broad resources of Massachusetts General Hospital. As a result, Vincent Memorial Hospital accepted Mass General’s invitation to become its gynecology service while retaining its own hospital identity and staff, and relocated to the Mass General main campus (photo: laying the cornerstone). In 1948, after operating out of temporary quarters during the war years, Vincent Memorial Hospital moved to its permanent home on three floors of the newly completed Vincent Burnham Building.